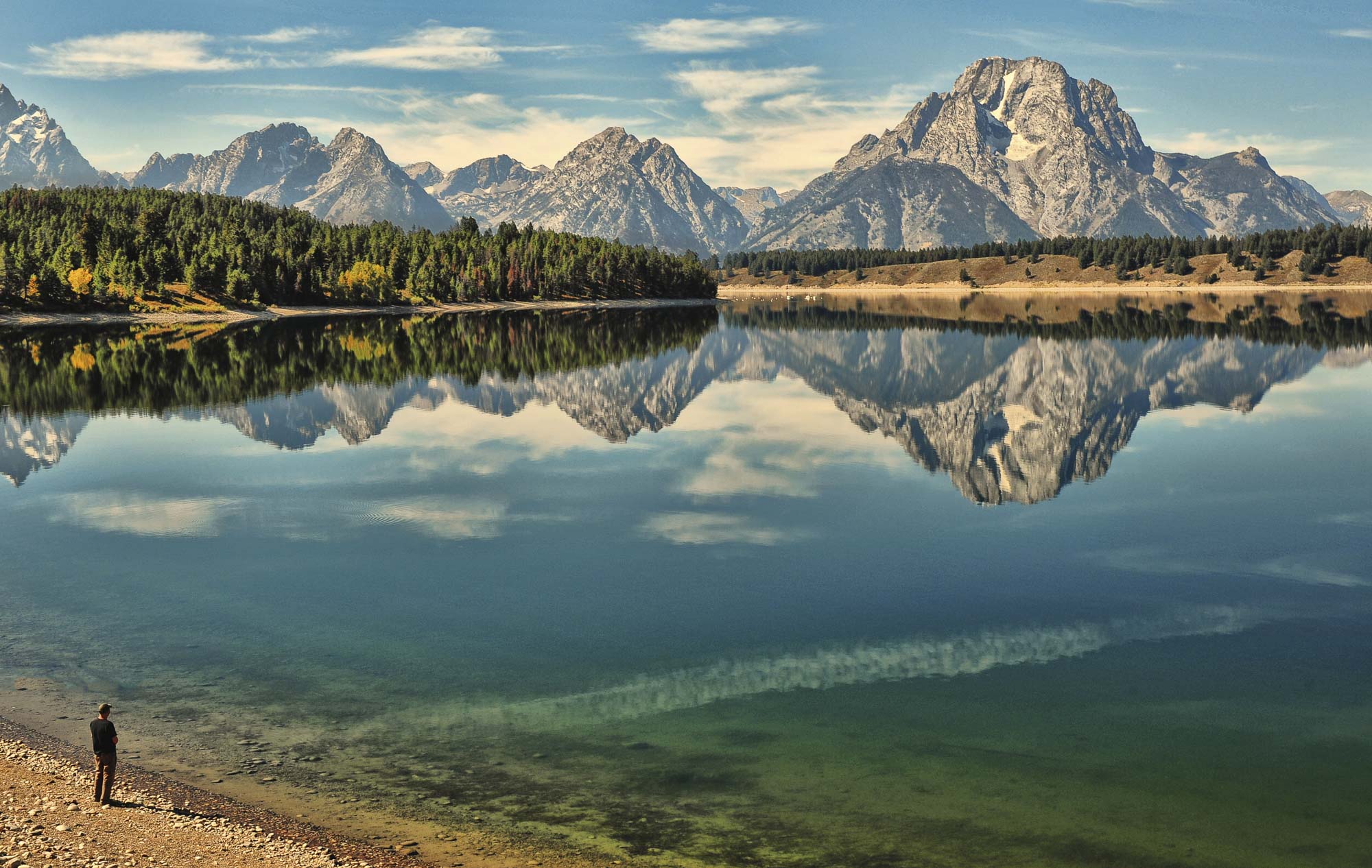 Grizzlies, geysers and big, open skies: a US road trip through 3,000 kilometre of Big Sky country

‘We had bears in the campground today,’ the check-in guy at Yellowstone’s Bridge Bay Campground breezily announces, pushing a wad of ‘Bear Aware’ pamphlets towards me. ‘So, if you go to the toilet at night, take bear spray.’ If the prospect of trying to pepper-spray a grizzly wasn’t enough to keep me locked inside our rented motorhome, the sight that greeted us at our camping pitch was. There, etched into the tree we’d parked against, were claw marks so deep sap flowed out of them in thick, honey-like clumps.

I believe the term is: gulp.

This was all my fault. I’d invited my parents on a 3,000-kilometre road trip through some of North America’s biggest scenery, then insisted we eschew motels for an eight-metre-long, three-bed, 255-horsepower Ford V8 RV. Why book a room on the edge of wildness when you can stay in the middle of it? I’d picked Idaho, Wyoming and Montana for their legendary, empty vastness: together, they offer more than 44,000 square kilometres of designated wilderness. I’d also wondered about the human stories hiding in the furrows of these barren landscapes. Now I had a taste of living further down the food chain – and found myself ungenerously relieved we were surrounded by people in tents (they’d make far easier prey).

A week earlier, mum, dad and I touched down in Boise, Idaho’s state capital. Until recently, Idaho had just one, unglamorous claim to fame: potato farming. The slogan on car number plates even reads ‘Famous Potatoes’. But, today, the nation’s best-kept secret is getting out. Idaho was the fastest-growing US state by population last year, according to the Census Bureau, as word spreads about its great outdoors (13 national forests, 18 ski resorts, 26 state parks and over 30 scenic highways) and bargain prices.

Boise is also one of the last places on Earth you’d expect to find a slice of San Sebastián, Spain’s famously foodie, Basque resort city. Yet amid the high-rises of a uniform-looking North American downtown, we find the ‘Basque Block’, where sun-dappled patios are peppered with diners clinking glasses of txakoli (Basque sparkling wine) and nibbling on pintxos (Basque tapas).

Turns out that in the late 19th century, throngs of Basque shepherds sought their fortunes in rural Idaho. Harsh winters were spent with fellow Basques in Boise boarding houses, and the strong community they built stuck. Which explains spots like Bar Gernika, its half-timbered interiors imitating historic Basque farmhouses, serving traditional kalimotxo – a rather studenty-sounding combo of Coca-Cola and red wine. It’s served over ice, with a slice of lemon, and is surprisingly good.

‘What’s happening in Hawaii – that’ll be us someday.’ Ranger Ron Silberstein delivers his doomsday pronouncement with ho-hum matter-of-factness. The news footage out of Hawaii lately has been all blazing-orange lava and black smoke. Around 280 kilometres east of Boise, Craters of the Moon National Monument and Preserve shows what happens when volcanoes really get to erupting. It represents the aftermath of a lava flood of Biblical proportions that scientists reckon dates back only 2,000 years.

The Devil’s Orchard is our favourite spot: an eerie ‘garden’ sprung from dead ground. Lumber pines afflicted with ‘witches’ broom’, their branches distorted into tangles by a parasitic plant, stick up between charred fragments of lava, the scene fairytale-spooky; like the rest of the park, it’s oddly picturesque, and all borne from the violence right beneath our feet.

That violence is laid disconcertingly bare when we cross into Wyoming and Yellowstone National Park. There’s a gentle beauty about the pine forests and placid lakes here that lends even greater power to the stuff we really came to see – geysers belching boiling water; evil-looking, bubbling mud pots; and, everywhere, steam escaping the Earth’s angry crust.

We make a beeline for Old Faithful, which periodically blasts a geyser of water as high as 55 metres. It’s more affable than expected: less fierce burst than fountainy whoosh. The star attraction is Grand Prismatic Spring, the park’s largest thermal pool – and its most colourful, thanks to microorganisms called thermophiles, bacteria that love blistering-hot conditions no other lifeform can survive. Driving towards the basin where the spring sits, we spot luminous orange, blue and yellow steam. Thanks to Instagram, the spring has lately gone from sideshow to major draw, but retains its modestly sized car park, so expect a crush.

Our last night in Yellowstone is the night the bears are lurking. Despite my dad making out like I’m a wuss, I notice he doesn’t leave the motorhome either.

The drives between stops offer their own memorable moments – like a menacingly muscular bison sauntering past our bonnet. But nothing is wilder than Smith Mansion. Propped on an isolated hill above the scenic North Fork Highway, en route to the cowboy town of Cody, this five-storey, mutated cabin looks like something out of a particularly twisted Grimm fairytale. Only Sunny Larsen knows the real story – her dad, whom she calls ‘a modern-day mountain man’, built it, adding floor after floor, with no blueprint, for 22 years. Construction stopped only when he died after accidentally falling from an upper balcony. Sunny now gives tours, determined to ‘protect, preserve and share’ this eccentric chapter of Wyoming’s story.

Approaching the front door, I spot the carcass of a recently mauled mule deer. ‘We have a grizzly problem,’ Sunny nods. ‘They eat fermented apples they find on the ground around here and it gets them drunk.’ Not keen on becoming a sozzled bear’s end-of-binge kebab, I follow Sunny into the house, where she shows me her dad’s interior creations: wooden hammock-style beds, wind chimes made from old railroad ties, logs-turned-dining-table-and-chairs. Her memories of growing up here range from the sublime to the ridiculous – a racoon once moved in and would help itself to dinner on the stove, replacing the saucepan lid afterwards – and we end the tour gazing out from one of the uppermost, open-sided platforms, ranches and snow-speckled mountains spread as far as the eye can make out.

Things get even more surreal in Montana. This is the famed Big Sky Country, at once the nation’s fourth-largest and third least-densely populated state. But just outside the one-road town of Fishtail, we find Tippet Rise, a 40-square-kilometre art centre in the middle of this glorious nowhere, with strange sculptures scattered across epic, empty ranchlands. Here, an old schoolhouse strangled by mysterious tangles of willow reed; there, two enormous boulders – each weighing the same as a baby blue whale – leaned together as if dropped from the sky. Philanthropists Peter and Cathy Halstead long imagined this trippy art park, then magicked it into reality, aided by a troupe of ambitious artists and their own cavernous pockets. Wonderful as the sight is, even better is the price point – US$10 (HK$78) for a sculpture tour, and the same again for the classical music concerts they hold around the artworks through summer.

If Tippet Rise is among the state’s better achievements, our next stop represents one of US history’s most infamous follies.

The Battle of Little Bighorn is generally regarded as the moment a decorated Civil War hero, General George Armstrong Custer, paid the price for his own hubris, when – vastly outnumbered – he was killed by tribal warriors he’d attempted to expel from contested land. But our visit exposes more layers of the story, a tragedy for everyone, leading to the surrender of the last Native Americans resisting the US Army, and ending their way of life on Montana’s plains. Alongside white marble headstones commemorating where US soldiers fell, red granite markers honour the Cheyenne and Lakota fighters who died defending their traditions. And though there are excellent hourly ‘battle talks’ by fabulously dramatic rangers, the graves scattered across these now peaceful plains tell their own story.

Wasteful as it was, I understand why people might spar over all this; what Buffalo Bill called ‘the free life of the plains’. After living just two weeks in this landscape – albeit with doors that lock and a microwave – you feel that bit more like an animal, returned to your natural habitat, both afraid and entranced.

The writer rented a motorhome with Cruise America (cruiseamerica.com). For more on visiting Idaho, Wyoming and Montana, see visitidaho.org; travelwyoming.com; and visitmt.com