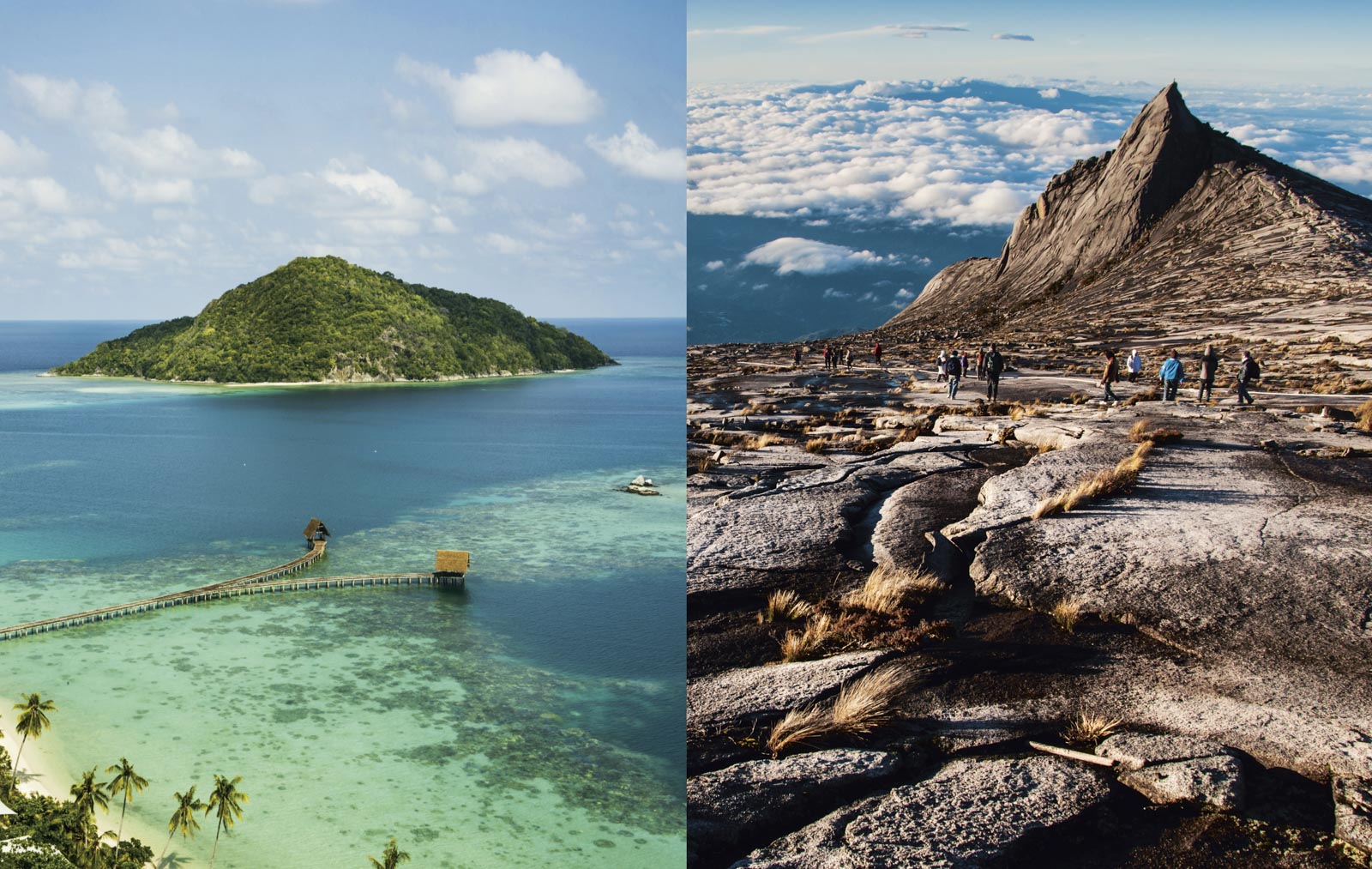 Travellers are either beach or mountain people. Which side do you fall on?

What do you dream of?  A sun lounger; a long, cool drink; the gentle sounds of waves and the breeze in the palms?  Or a stiff climb to a rocky outcrop, a blast of pure air in your lungs and a sublime view of the sunlit valleys below?

Which destination tops your dream list: the remote islands of the Galapagos or the Himalayan Kingdom of Bhutan? What’s it to be this year – beach or mountain?

The divide is real. In 2015, an article called Personality and Geography published by psychologists at the University of Virginia arrived at some interesting conclusions. Mountain lovers are more introverted than people who love to spend their time by the ocean. They like to be secluded, to have time to think. But if you love to socialise on holiday, then the beach is the place for you.

We can always conduct our own one-person focus group to dispute even the most rigorous academic studies. Just about my favourite place on Earth is a little mountain village called Comares in southern Spain. I’ve spent hours standing on the highest spot, between the village and the old cemetery, watching the light and shadows of the clouds scudding across the limestone cliffs and plains of the Axarquía. The sparkling waters of the Mediterranean are also clear to see; but it’s been years since I bothered to drive to the beaches down there. Too many people, and too little to look at: sand and sea, sea and sand – where’s the joy in that?

I’m 100 per cent a mountain person. Yet whenever I do the Myers-Briggs personality test, my ‘extrovert’ rating is off the scale.

Maybe the University of Virginia scientists should consult their colleagues in the humanities department. They’d say the beach or mountain divide has been growing for at least 250 years – and that it’s as much cultural as psychological.

Modern tourism, made possible by advances in transport and the decline  in warfare, emerged in the 19th century. The dominant cultural force was the Romantic Movement. Poets such as Goethe and Wordsworth and painters like Caspar David Friedrich took to the mountains to pit their formidable egos against the might of nature. Where they trod, their readers and adherents followed, into the Swiss Alps and England’s Lake District and beyond.

But quietly at first, the allure of the ocean and the beach began to spread.

A novel called Paul et Virginie by Jacques-Henri Bernardin de Saint-Pierre, published shortly before the French Revolution, was inspired by the writings of philosopher Jean-Jacques Rousseau and inspired generations with its vision of a simple island life far from the corruptions of Europe’s cities. It was set in Mauritius; and Mauritius is still profiting from that yearning. (There’s even a Paul et Virginie hotel: three-star, adults-only, where ‘time stands still and romance hangs in the air like a heady perfume’.) If mountains were about standing alone against the forces of nature, the beach was about escape of a very different kind: to a place of sensuality, idleness and freedom from worry. Writers drew from the deep well sunk by Paul et Virginie: take The Garden of Eden, Hemingway’s weird last novel about a pre-tourist French Riviera, or Alex Garland’s The Beach, a dystopian romance for the backpacking generation set in Thailand.

It’s obvious where the big money is in modern Asian travel today: in the beaches, the resorts, the Balis and the Phukets. But as independent travel grows, so more of us are looking up – to New Zealand’s Southern Alps, say, or the gorges and trails of Yunnan.

In the links that follow, I come down from my mountain and preview a new resort off Indonesia’s Bintan Island. Then the writer Laura Wilshaw chooses a landmark event, her 40th birthday, to scale a physical landmark: Malaysia’s Mount Kinabalu.

Finally, we choose three more mountains you can summit even if you’re not a supremely fit person clad in all the latest high-tech gear, and writer Lee Cobaj presents her pick of the new outstanding islands resorts around the region.

We hope you’ll enjoy both, but the chances are you’ll focus on just one. As the research paper suggests, most of us conform to one type or the other: we’re either beach or mountain. But wherever you seek your perfect geographical match, in sand or rock, horizontal or vertical, the places that follow should be a good place to start.

Clear waters, white sands, marine life to rival the Maldives – and all just two hours from Singapore. In June, Indonesia’s Anambas archipelago, 250 islands sprinkled between the Malaysia peninsula and western Borneo, welcomes new luxe retreat Bawah Private Island. Arriving by private seaplane, the final swoop over the island’s 300 hectares of rainforest, opal-like lagoons and multicoloured coral reefs feels like arriving in the land that time forgot – in fact, the area was uninhabited until the resort staked its claim. The safari-style villas – some over water, some on the beach, others in the jungle – come with four-poster beds hewn from driftwood and bathtubs of recycled copper.

The Koh Rong archipelago, a string of 15 emerald green isles circled by pearly beaches and the turquoise Gulf of Thailand, is astonishingly beautiful. Until recently its seahorse-filled bioluminescent waters were the preserve of backpackers shacked up in bamboo huts and billionaires helicoptering into the Song Saa Private Island retreat, with very few options in between. That looks set to change thanks to some hip new arrivals: Six Senses Krabey, a sexy, sustainable hideaway that opens this year with 40 pool villas, organic menus, a soul-soothing spa, a meditation cave and even an observatory for guests to ponder the mysteries of the universe; and the Alila Villas Koh Russey, another eco-leaning retreat with a contemporary zen design: all straight lines, contrasting woods, swathes of light and a boho vibe.

This year, Bali is being recast as the affluent sophisticate with a wave of high-end hotel openings along the dramatic cliffs and golden shores of the southern Bukit peninsula. Among this year’s most anticipated are a cliff-clinging Six Senses resort, with pod-like villas, a spa scooped out of a limestone cave and Uluwatu Temple views; a Waldorf Astoria with a contemporary kick – think Scandinavian white lines with subtle Indonesian motifs; and a Mandarin Oriental, from lauded architect and interior designer Jean-Michel Gathy, comprising teak and volcanic stone suites and villas, a show-stopping 100-metre infinity pool and a rooftop restaurant cantilevered over the cliff.

The December opening of hotelier Ian Schrager’s glossy Edition (see page 58 for more) was the biggest thing to happen in Sanya, the beach resort on southern China’s Hainan Island, last year. In 2017, an ultra-luxurious outpost of One&Only and a US$1.6 billion (HK$12.4 billion) Atlantis resort will also grace Sanya’s shores. No longer content with its place as the ugly duckling of Asian tropical islands, Hainan is reinventing itself – the ‘Hawaii of the East’ – with international brands and top-notch facilities, including new roads and railways making it easier to reach Sanya’s crescent beaches, mountain spas and PGA-spec golf courses than ever before.

Recognisable for its distinct shape and snowy white collar, Japan’s highest peak is still an active volcano. The official climbing season runs from July to September, when the four trails and mountain huts are open. It’s not dissimilar to climbing Mount Kinabalu – most people go up in a day, stay overnight and summit in the morning. It’s not a tough climb: around seven hours up and three hours down, but still cold at the top and at 3,776 metres high, beware of the altitude.

Established as a hill station by the French in the 1920s, Sapa is the gateway to Vietnam’s best treks. The hill tribes also make the region as culturally rich as the rice terraces make it beautiful. Although Sapa itself is modernising, trekking this dramatic countryside is a delight.

Time: Between one and four days, depending on how much you want to see
Difficulty: 1/5

Another active volcano at 3,726 metres tall, Mount Rinjani is the second-highest volcano in Indonesia after Mount Kerinci on Sumatra. There are two options to summit, the most popular being to stop at the stunning crater rim at 2,641 metres rather than go the extra, tough 1,000 metres to the top. Lake Segara Anak within the crater is exceptionally blue and beautiful.

Time: A crater trek will generally take two days and one night
Difficulty: 2/5